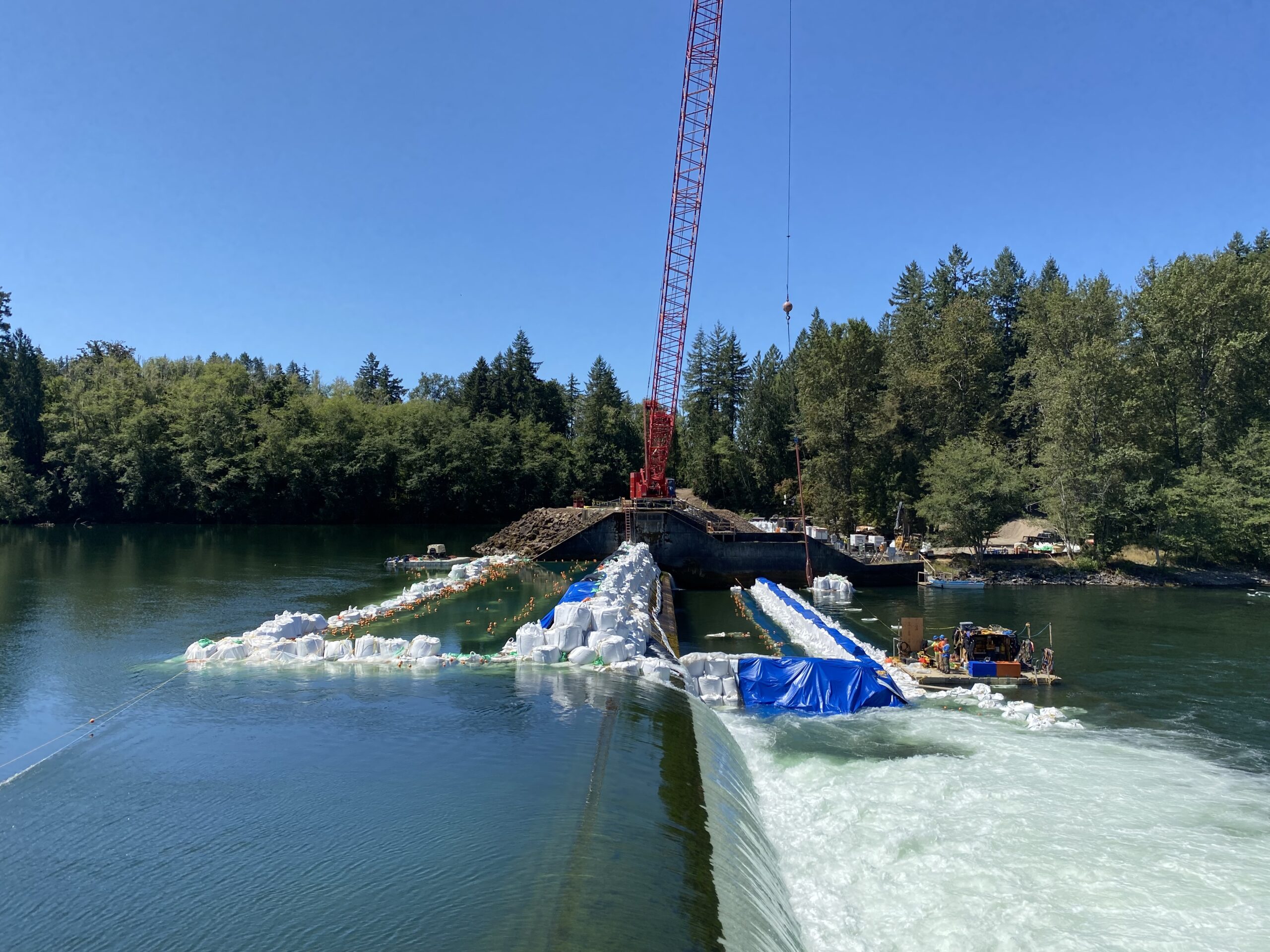 Shimmick’s Cowlitz Falls Barrier Dam Repair project team has wrapped up their first season of in-water work and is well underway with preparation of the second in-water season, starting in July. The project entails inspection, repair, and reconstruction of the weir dam and apron slab, which was damaged due to the weir’s shape and subsequent underwater hydraulic jump. The weir dam plays an important ecological and environmental role in the southern migration of various fish species.

The bulk bag cofferdam was made up of 2,400 bags of stream bed gravel. The cofferdam diverted the water flow around the work area. Although the cofferdam design included a plastic liner and perforated drainage pipe and pumps to seal and keep the work zone dry, water leakage proved to be a challenge. To combat this, and to keep the area dry for contract work, including concrete placement, the team continuously ran six pumps to pump water that made its way past the liner and bulk bags back into the river.

The team installed the bags with cranes in groups of two and five, depending on distance to the crane hook. The Manitowoc 999 in the employed configuration had a maximum pick weight of 19,000 lbs. Divers helped direct the bags to their location within the dam. With both installation and removal, the team was able to significantly shorten crane cycle times. The team routinely placed 85 or more bags in a shift, with a maximum of 179 set in a single shift.

To survey and replace the weir, the team is diverting the river by installing a temporary bulk bag cofferdam in two phases, an innovation that reduced required in-water work from three seasons to two, significantly shortening the project’s timeframe and reducing costs to the city of Tacoma. The team was required to complete all in-water work between July and the end of September per fish and wildlife permit restrictions when fish are not migrating, meaning everything had to be out of the water by Sept 30. Even more impressive, the team had to complete all work on the cofferdam within 20 days, with only 40 days from NTP to the start of the installation of the cofferdam. As a true testament to the team’s preparation and determination, they were able to complete the work three days early.